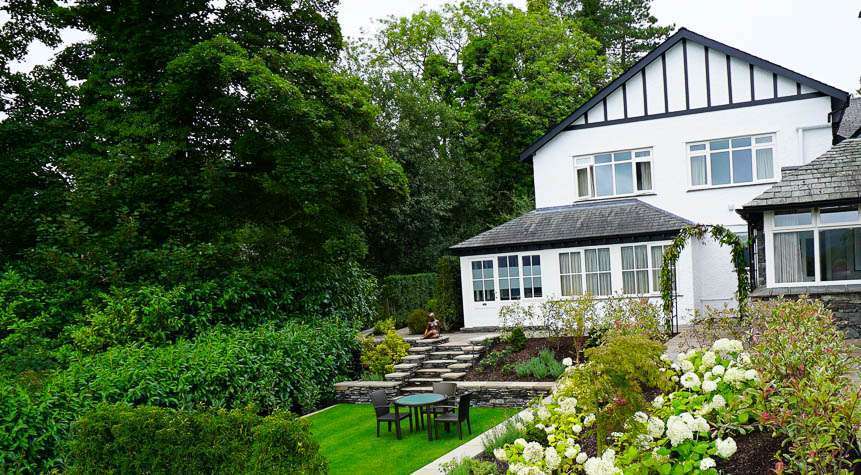 Do you know what I really love about the Lake District… its predictability. Allow me to explain.

A few years ago I held the position of Editor of a bi-monthly magazine entitled Lakeland Walker. I would spend weeks about in, to my mind, the most stunning of England’s National Parks. I would generally base myself in Keswick, at my favourite B&B, from where I would strike out for long days on the fells, enjoying the panoramic views, sometimes the loneliness, and other times the camaraderie of my fellow hikers. I have experienced occasional hairy times, such as practicing my mountaineering skills on such climbs as the four-pitch VDiff route that is Little Chamonix on Shepherds Crag in Borrowdale. I still shudder when I think of the crux on the polished, sloping block and on to the overhanging final pitch. I took my Mountain Leader’s course in the Northern Fells, camping out in a one-man tent as snow blanketed the ground, and went on night explorations with a head torch and map for company, tramping over sodden ground in the pitch dark partaking in micro-navigational exercises. 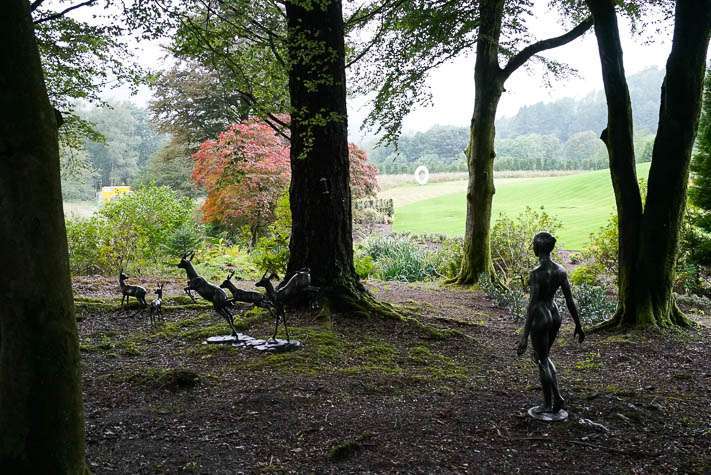 Occasionally, I would review one of the splendid hostelries with their crackling fires and comfy chairs, and enjoy a hearty meal of pie and chips and a few pints of Sneck Lifter, a rather splendid strong dark ale brewed by Jennings. By all accounts, a sneck is an old-fashioned latch and a sneck lifter was a miserly old sod who would lift the latch on a pub door and poke this head into the bar to see if there was a friendly face of someone why would buy him a pint. Never having been a regular and therefore never having become acquainted to any locals in any of the taverns, to all intents and purposes I was just another tourist, and therefore would always stand my own round. Lakeland Walker is still going strong, and I have been happy to contribute the occasional outdoors product review for the title. Oh yes, the ‘predictability’. Rain! 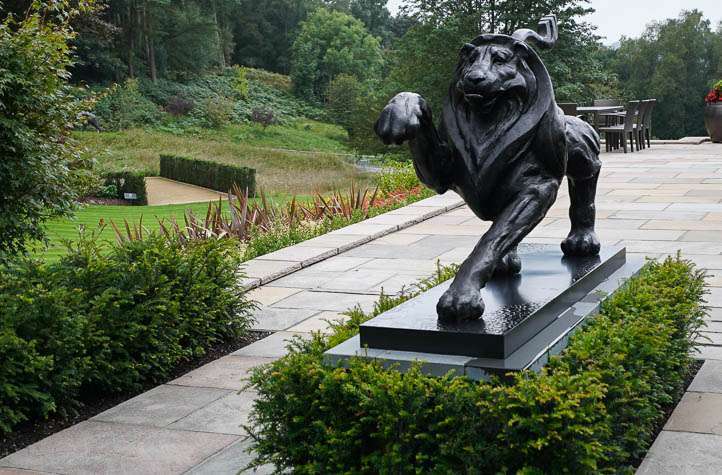 Now I find myself back in the Lakes and staying at the rather imposing Linthwaite House, a 36-room country house retreat standing high above Lake Windermere. The hotel, which nestles amidst fourteen acres of beautifully manicured lawns and woodland, was acquired by the Leeu Collection at the end of  March 2016, the first acquisition outside of South Africa, joining a prestigious hospitality portfolio comprising three five-star boutique properties in the winelands, all of which give new meaning to the concept of lesiure. In 2021, guests will be able to enjoy the hospitality of the second European acquisition in Leeu Villa Querce, a luxury hotel with pristine gardens in Florence, Italy, which is due to open in 2021. Both the historic centre of Florence and the Lake District are UNESCO World Heritage Sites. 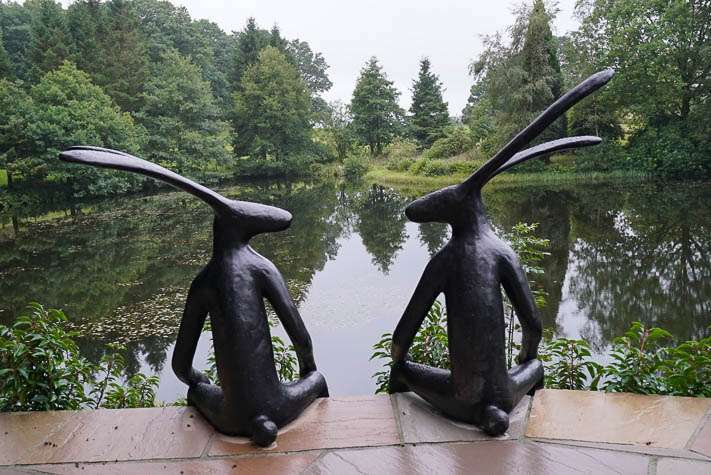 The tarn is situated an easy walk up from the hotel, where guests have access to a rowing boat

Harry Fernandes, Area General Manager, UK & Europe, joined the Leeu Collection at the end of March, having previously spent fifteen years with Rocco Forte Hotels in London, Edinburgh and Sicily, his last role having been to oversee the opening of a large hotel in the Saudi Arabian port city of Jeddah, on the Red Sea. Harry is currently engaged in supervising the completion of the ongoing changes that have been taking place to the Lakeland property and grounds, including the construction of six exquisite Woodland Suites situated adjacent to Linthwaite’s tranquil private tarn. Work is also soon to be completed on a raised wooden Windermere Deck, which stands close to the tarn and enjoys views to the north of Lake Windermere and the mountains beyond. It will provide a magical woodland setting in which to enjoy light meals and early evening drinks. 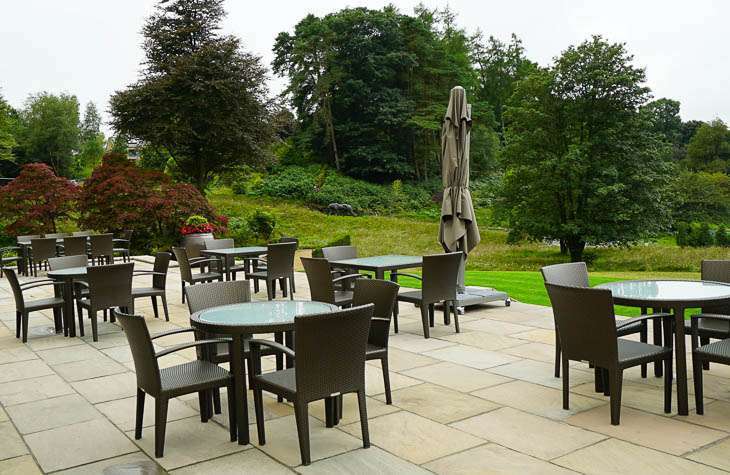 And, my dear friends, the clouds are sulking over the fells and it is drizzling. After weeks upon weeks of hot, sultry weather, I arrive with cameras in order to present to you images of a spectacular hotel with a stunning, sunny backdrop, and raindrops keep falling on my head. Still, it takes a lot more than that to dampen my spirits, hardened outdoorsy person that I am. An awful lot of people have laid claim to the saying, ‘There is no such thing as bad weather, only bad clothing’. A truism, indeed. So I wander out in tee shirt and jeans, exactly the clothing that I have warned people off wearing for the past twenty years, because that is all I have with me. Here comes another of my favourite sayings, ‘Do as I say, not do as I do’. I wander through the hotel, into the drawing room and bar area, and out on to the terrace with its grandstand views of Lake Windermere. Despite the recent heatwave, the stunning, manicured gardens are green and lush, the plants beautifully attended to. 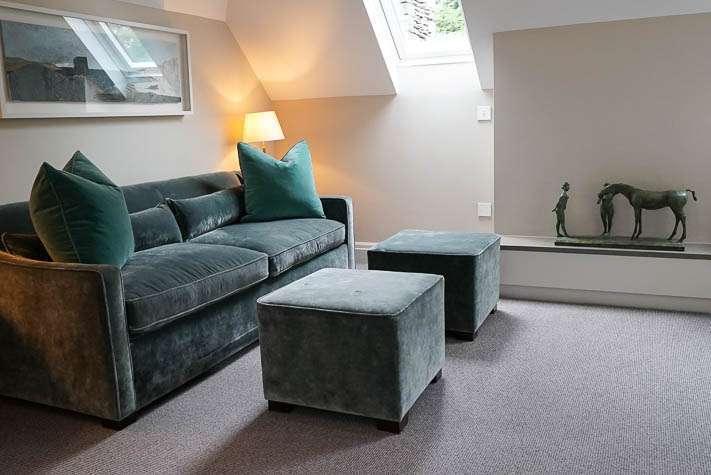 I have been given the Loft Suite, located on the top floor of the main house. When I checked in, the receptionist looked slightly puzzled that I had been offered such a beautiful zone in which to rest my head, and inquired whether I was travelling solo. Quite alone, I replied, as she steered me to the terrace, where I was served a welcoming Pimms and Lemonade, whilst the porter carried by bags up the two flights of stairs. The Loft Suite is beautifully appointed. A small entrance leads to the functional lounge with comfortable settee, two matching foot stools, sleeper couch, a television which must have measured over 50 inches, tea and coffee-making facilities, and a mini bar. 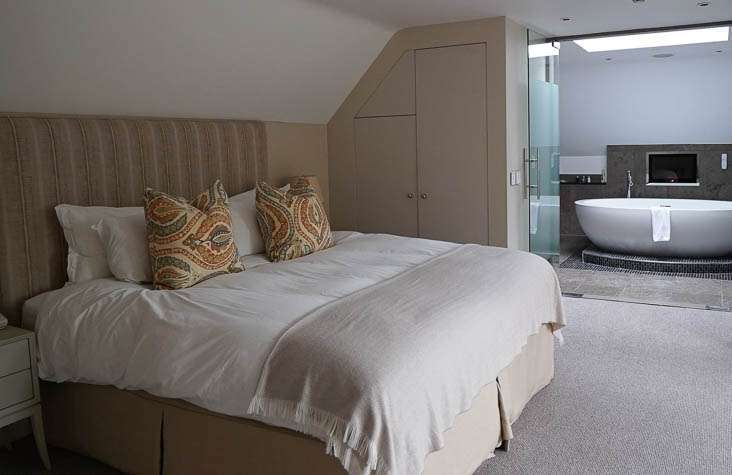 The sumptuous bed in the Loft Suite, with access to the bathroom through frosted glass doors

Walking through to the central bedroom area, there is a dresser complete with chair, another sleeper couch, telescope, and a super king-size bed, resplendent with cushions. Two frosted glass doors lead through to the statement bathroom with centrepiece bath, which I was quick to note was, in fact, larger than my wildlife pond at home; twin sinks; walk-in shower; bathrobes; and toiletries. I decide against luxuriating in the enormous bath with its wall-mounted television, for fear of running the taps for too long and draining Lake Windermere into the bargain. 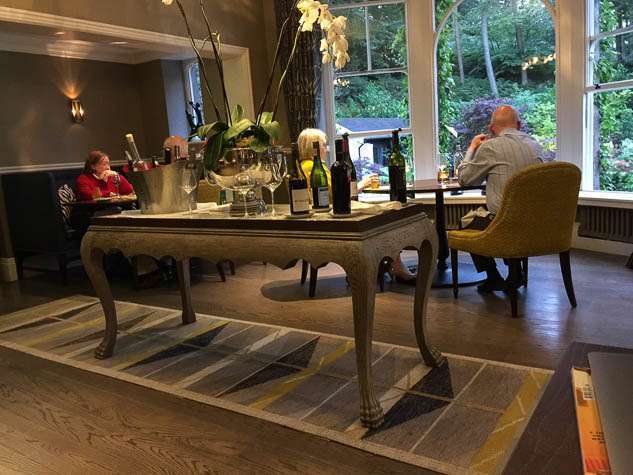 The pleasant dining-room with picture-window views over the gardens

I take the opportunity to dine here, in a restaurant defined by its Italian cuisine. The changing menu is conceived by consultant chef Ritu Dalmia, a household name in both India and Italy. I ask Harry Fernandes about the food philosophy: “The Lake District offers a range of good food, but much of it is the same, so we felt it important to differentiate from the rest and give diners a special reason to celebrate through our Italian cuisine. Italy has twenty regions, and yet sometimes we only know it for pasta pizza. The idea is to offer a menu using local ingredients, and served in a non fussy environment.” During dinner, I am encouraged to see Ritu walking around the tables, talking to diners, including myself, about what the kitchen was preparing for them, and explaining the ingredients used. As Harry continued: “At all the hotels I have worked in, I have always encouraged chef to walk around amongst the diners. Chef is an artist, and the food served is their creation, so it provides an opportunity for them to be appreciated for their skill.” 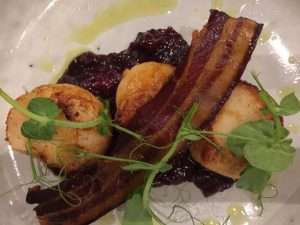 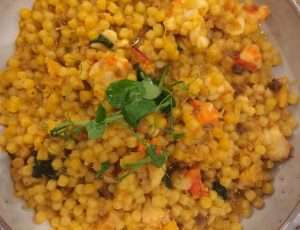 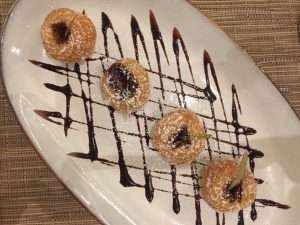 I start with pan-seared scallops nestling on a bed of balsamic stewed berries and overlaid with crispy pancetta (£14.95). The scallops are warm, succulent and perfectly cooked. I find that the stewed berries overpower the taste of the scallops, which deserve to be treated with respect and eaten solo, so I save the sweet berries to be enjoyed with the pancetta. For the main course, I choose Sardinian Fregola, a dish entirely new to me. It is described as a broth of prawns, crabmeat, wild herbs and saffron (£16.95). A type of pasta similar to North African berkoukes and Israeli ptitim, Ritu explains that it typically consists of semolina dough that has been rolled into balls 2-3mm in diameter and toasted in the oven, and is served in a bowl. It has the appearance of a risotto. It is tasty, but filling. Having said that, I still opt for dessert, a Zepolle, with rosemary and gianduja (£8.95). The deep-fried dough balls (four in this case) are topped with powdered sugar, and lay on a delicate, criss-cross pattern of chocolate mixed with hazelnut pasty. A star turn, indeed. I am tempted by two types of house wine, the second a rather splendid Pinot Noir, and at £12 a glass, not to be sniffed at. So I drink it, instead.

Post dinner, I decide to retire to the lounge with a magazine to hand, and pass an elderly gentleman snoozing in front of the fire, a book resting on his lap and his glasses parked somewhat precariously on his head. I tiptoe past and take up my post by the French doors, which lead out to the terrace. 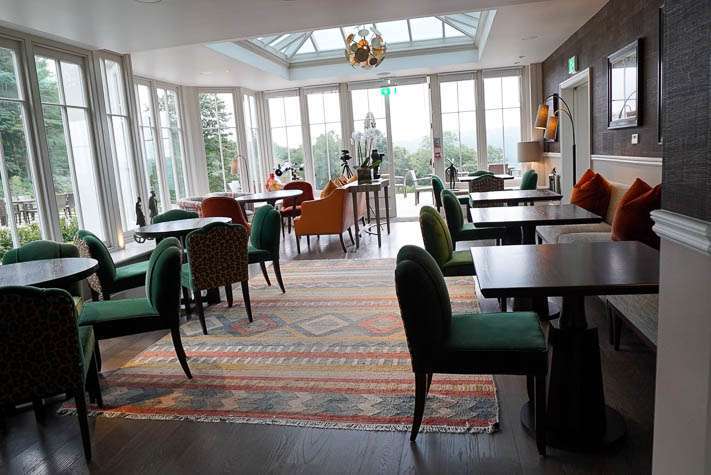 The bar area is adjacent to the lounge, and offers a relaxed seating area

Retiring for the night, I return to the Loft Suite to find a bottle of still water and two chocolate treats by the bed, the sheets having been turned down in my absence; the wet towels and bathrobe replaced; the blinds drawn; and the recessed lights emitting a soft glow. Sleep comes easily in such surroundings befitting the property’s 5-star status.

Breakfast is another feast for the eyes, and the stomach, with cereals, fruit, juices, smoothies, plus an A4 sheet of different hot options, from kippers to crushed xxxxx with poached egg. I opt for the Cumbrian breakfast, with fried egg, Cumberland sausage, bacon, tomato, mushroom, black pudding and, yes, baked beans, the latter one of my breakfast staples, and how nice to see such a prestigious establishment offering them to the diner. 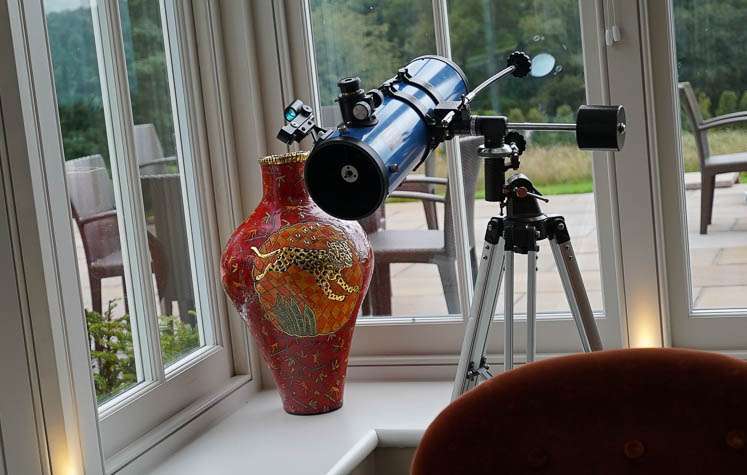 After breakfast, I take time out on the terrace. The weather is showing some promise, with a faint hint of blue sky over distant Lake Windermere. I reflect on how the previous afternoon I had driven through the madness that is Windermere at this time of year, with the nose-to-tail traffic, coaches, hordes of tourists thronging the cafés and bars, and the window shoppers. Utter madness. And here I am, enjoying an oasis of calm, hearing not a sound excepting for the gardeners busying themselves amongst the shrubbery, planting new plants amidst the luscious borders. 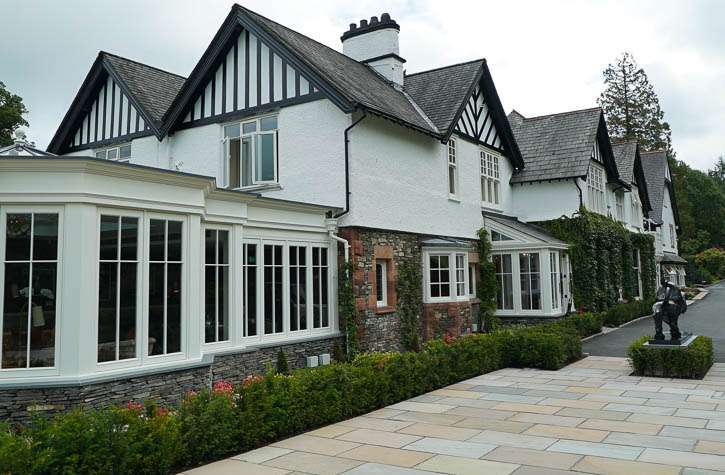 It is understandable why Leeu Collection founder Analjit Singh decided upon the Lake District to open his first European hotel, when one takes into consideration his vision for sophisticated escapes and unique travel experiences. It is equally understandable why people from all over the world would want to travel here in order to experience hospitality at its finest; where the property is pristine in the best 5-star way imaginable; the food is exceptional; and the immaculately presented staff are warm, friendly and discreetly attentive. 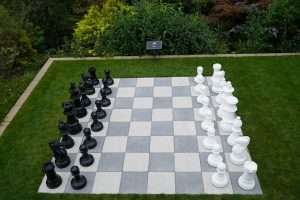 With its established gardens and private woodlands with pleasing paths, guests may try their hand at a game of boules on the hotel’s well-maintained court, or chess, making use of the hotel’s eye-catching giant outdoor chess board. The more adventurous may fancy using the hotel bicycles to explore the area. Should that be you, then just remember to turn the taps on when you leave the hotel for a chance for that mammoth bath to have filled up, for when you have made the return slog back up the hill. You’ll be well ready by then for a touch of luxurious pampering amongst the bubbles. 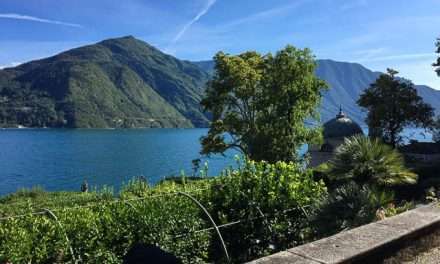 Satisfy your pedal lust in Serbia