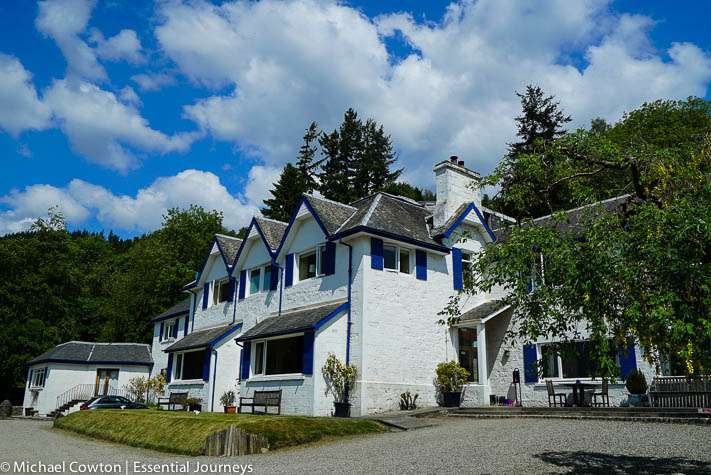 SITUATED at the eastern edge of Loch Earn in the heart of Perthshire, surrounded, as you might expect, by spectacular scenery, a rural gem is found in the shape of The Four Seasons Hotel. Envy definitely plays a part here because, for a loch-side retreat, it doesn’t get much better than this.

Soaring peaks and thick woodland spill down to the water’s edge by the village of St Fillans, which itself boasts pretty cottages and imposing stone villas with wonderful frontages festooned with delicate fauna and mature shrubbery, adding colour to this, the eastern gateway linking the Loch Lomond and Trossachs National Park with Perth and the spectacular Highlands beyond. 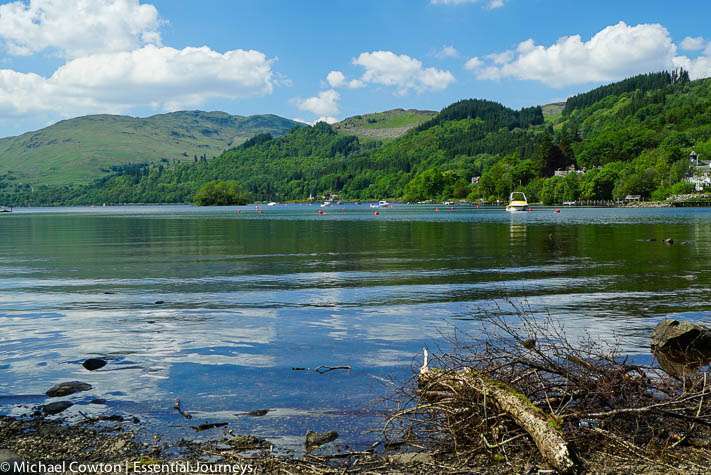 View from the southern shore of Loch Earn, which stretches for seven glorious miles

Loch Earn stretches due west of St Fillans for almost seven miles to Lochearnhead at its western end, and, at 87 metres, is one of the deepest bodies of water in Scotland. Once here, it is all too easy to allow oneself to succumb to the tranquillity and timelessness of the place. Yet, flip the coin, and the door opens to walking, golf, fishing, boating, bird watching and Munro-bagging. But then, you could simply cherish the peace and feed the ducks that have taken up residence hereabouts.

The Four Seasons Hotel is something of an icon, with parts dating back to the early 1800s. Originally the home of the manager of the local lime kilns, it became the schoolmaster’s rather grand residence before being converted to a small hotel in the 1900s. More change was in the air in July 2017, when Susan Stuart took over the ownership. With a background in hospitality, Susan relocated from the heady buzz of London to this rural idyll with plans for a staged re-development programme. With only a narrow window of opportunity during a six-week closure in the winter months, Susan respects the fact that guests will not want to be stumbling around concrete mixers and paint tins during the high season. Early renovations progressed well on The Tarken, where guests and locals alike today mingle and enjoy an informal drinking and dining experience or take afternoon tea on the small terrace overlooking the loch. 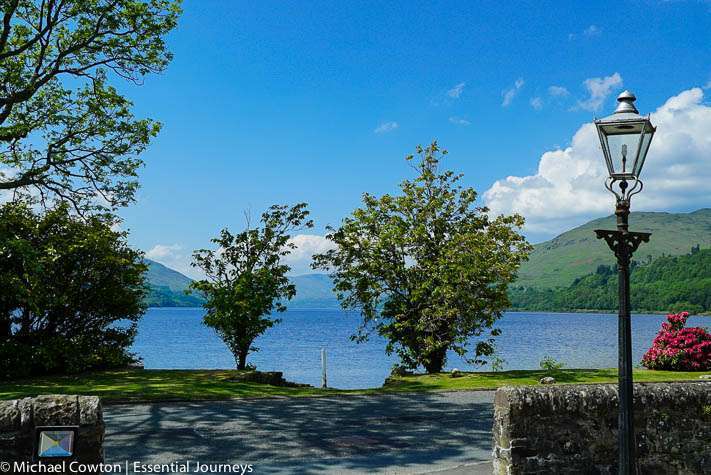 Glancing over the Tarken menu, I note locally sourced haggis with clapshot, with a peppercorn sauce. Clapshot was new to me. Apparently, it is a traditional Scottish dish that originated in Orkney and may be served with haggis, oatcakes, mince, sausages or cold meat. It is created by the combined mashing of swede, turnips and potatoes (ah, those neeps and tatties!) with the addition of chives, butter or dripping, salt and pepper, with some versions also including onions. Another tempting offering was Four Seasons Posh Fish Pie with locally sourced fish, rich, creamy mashed potatoes and seasonal greens. Looking through the menu, it was pleasing to note the provenance of the food, being both locally sourced and seasonal whenever possible.

The two-rosette Meall Reamhar Restaurant (Green Hill, appropriately), is where guests are treated to a fine dining experience with an impressive a la carte menu and wine list to accompany it. Opposite reception is the Wee Bar, where one can enjoy pre-dinner drinks or a nightcap. It was here that, pre-dinner, I ordered my normal tipple, a Bombay Sapphire and Fever Tree tonic. Susan then suggested I try a Boodles Mulberry Gin with Prosecco. It was only then that I noted the number of flavoured gins lining the bar. How could one resist! It set the tone for the evening as I scanned the Meall Reamhar’s menu. Susan then informed me that The Four Seasons had been named Hotel of the Year Central Scotland at a Scottish Hospitality Awards dinner the previous evening in Glasgow, an impressive feat by anyone’s standards, and particularly considering the time that Susan has been in situ. 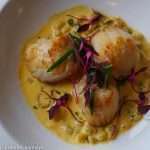 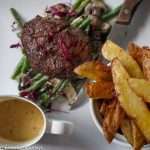 The scallops were perfectly prepared, and nicely set me up for the mains dish, a Special of the Day – Scotch Angus Fillet Steak laid on a bed of green bean and wild mushroom fricasse, hand-cut chips, and a rich peppercorn brandy sauce. It sounds daft, but I felt I could have cut through the meat with a banana, it was that tender and succulent. 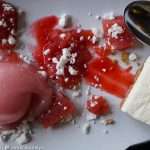 For dessert, I opted for the Gin Bothy Raspberry Gin and White Chocolate Cheesecake, with poppy seed tuille, and segments of Gin Bothy Strawberry Gin Jelly.

After dinner, I made my way half-way up the main staircase to check out the library, a real get-away-from-it-all experience where one can relax with a good book in one hand and a glass of something rather appropriate in the other. I then strolled across the quiet road to the loch, and spent a contemplative half-an-hour watching the ducks gliding by. 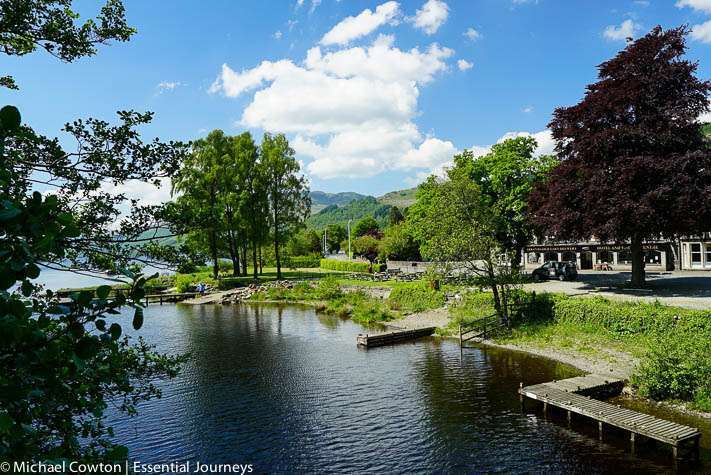 Views are plentiful from whichever angle one views Loch Earn

With the sun setting behind the distant mountains, there was a stillness in the air as I took in the majestic panorama. Sensing movement behind me, I turned round to find Susan with three-year-old Black Labrador Finn. Now, Finn is something of a celebrity around these parts, with his own blog, which you will find on the hotel’s website. Historically recognised as one of the best dog-friendly hotels in Scotland, the aim now is to create one of the best pet-friendly hotels in Scotland. As Finn points out, dogs are allowed in the bedrooms and the log cabins, and there is always a biscuit bone to be enjoyed on arrival. Pet owners will also find a biscuit jar in both bars. Fancy an evening out? No worries, as owners can take advantage of the pet sitting/walking/listening service. 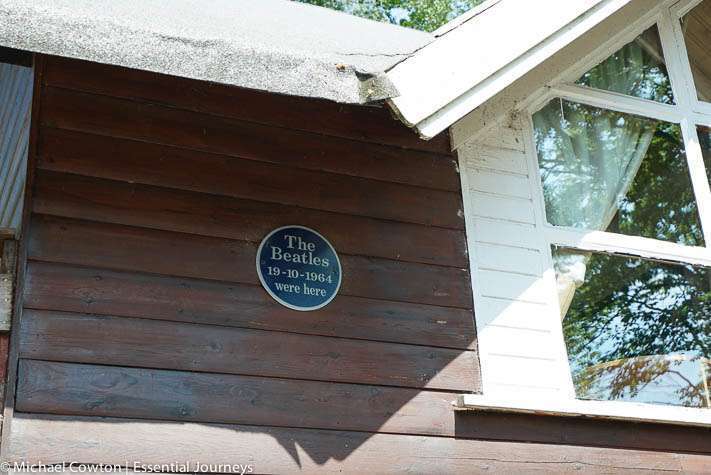 Chalet No.6 on the steep, wooded hillside where The Beatles stayed for a couple of days in 1964

The hotel currently offers 12 rooms in the main house, two with four-poster beds, and most offering expansive loch-side views. The rooms come complete with televisions, Bose stereos, and even rubber ducks in the ensuite bathrooms. There is also The Vivaldi, a two-bedroom holiday apartment, and six cosy chalets scattered on the steep wooded hillside behind the hotel, one of which proudly boasts a plaque recognising a stay by The Beatles in 1964. Despite its size, the hotel offers guests a homely, cosy feel. There is certainly nothing ostentatious, and Susan is keen to maintain the current ambience, whilst conscious that work needs to progress when time permits as she continues to place her own stamp on the hotel. It will take time, but then, as night falls and I find myself gazing absent-mindedly out over the stillness of the loch, no one around here is clock-watching. 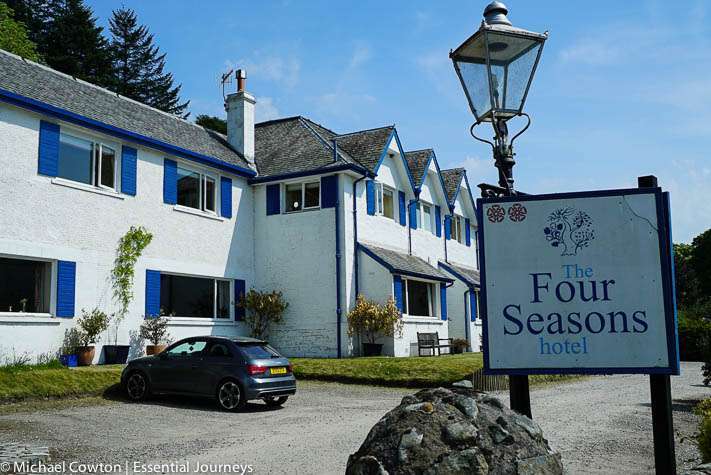 The Four Seasons Hotel currently offers 12 rooms, most with views over the loch

Offshore from St Fillans lays the small, wooded, uninhabited Neish Island. Staring at its ghostly outline now, it is hard to imagine that it had once been the scene of a massacre. Let me take you on a brief journey through history to 1612 and the reign of James VI. The Clan Neish had all but been wiped out, mostly brought on as a result of their own actions due to predatory raids on their neighbours. The remnants of the clan sought refuge on the island. All was peaceful until New Year’s Eve and a full moon, when a simmering feud with their arch enemies, the MacNabs from Killin, finally blew. A MacNab raiding party laid siege to the island and slaughtered the unsuspecting Neish clan. That tragedy, as I say, was an awfully long time ago. Much may have changed since then, but the mountains, the loch, the scenery, nay, the serenity, still exist. Time is on a go-slow, and working in perfect harmony with the unutterably beautiful landscape. 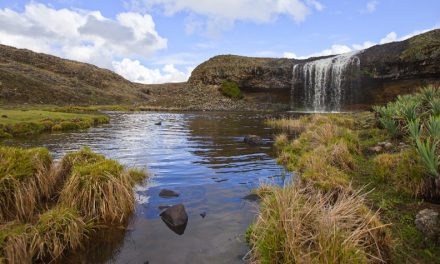 Eco-safari lodge due to set new standards for Ethiopia