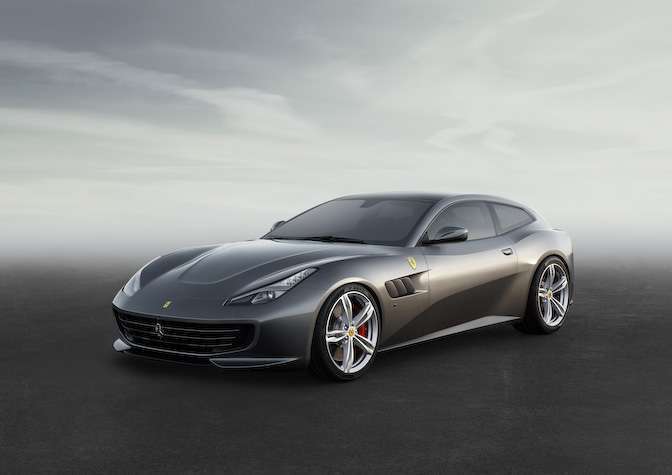 Not given to scribing platitudes either for the sake of them, or because it might score some tenuous, subsequent ‘credits’, Iain Robertson, a long-time Bugatti devotee, believes that the latest Ferrari is from a class above

UNVEILED AT the recent Geneva Motor Show, Ferrari intends to set the automotive world rocking on its heels with its all-new GTC4Lusso model. Great cynic (although ‘grating’ might be a more apposite adjective) that I am, I would venture to suggest that this as-yet-unseen-in-public sportscar (at the time of writing) is really little more than a rehash of the limited production FF model of a few years ago.

It was THE sporting ‘estate’ that set the ski slopes alight at the time. Beloved by every spotty car journalist and his dog, if you were one of the ‘chosen few’ that headed for the high slopes at Chamonix that year, you would have witnessed, firstly, how badly some of these scribes drive (at least one FF was mashed beyond economic repair, as a result of a personal imbalance between knowledge, bravado and brash enthusiasm). For those that managed to drive away from the ice-covered car park without hitting anything, the combination of physics-defying, 4WD chassis dynamics and around 651bhp formulated some compelling column inches.

Despite costing well over £200,000, it became an overnight success story for Ferrari, not just changing its customer profile in one fell swoop to a younger, less classic value-orientated type, but also leading the company to hand-build over 880 examples in the first year of production. Unlike several car companies I could and have named in the past, Ferrari does not have to find off-piste, disused airfields in which to hide its stock, as every single example has a buyer. 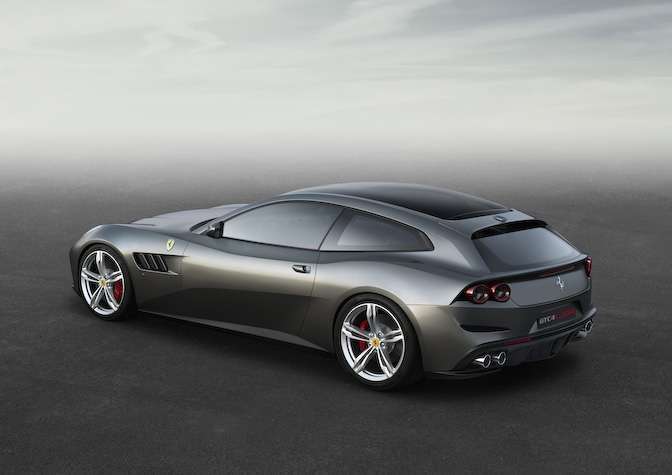 While the GTC4 is said to be ‘an addition’ to the company’s range, you can guarantee that it is set to replace the FF. It retains the four-wheel-drive system and the fFour individual, hide-wrapped seats that gave its forebear its name, but the new GTC4Lusso now incorporates four-wheel-steering in its long list of technological talents. The last time that I experienced such know-how was on the Honda Prelude coupe of the late 1980s, which again highlights that there is nothing new under the sun, even though Ferrari might never have applied it before.

Of course, you have to feel sorry for the typical Ferrari driver, or the driver of any supercar. While some of them can handle a little bit of precipitation, if it turns to snow (or ice), the last thing they would wish to do is stuff a few hundred grands’ worth into the nearest snow bank (as 2011’s journalistic miscreant did). Poor things. They have to resort to the Fiat PandaCross, or some Bavarian 4×4 estate car, to whisk them and their gear to the slopes and their premium priced winter refuges, denying their friends and fans the opportunity to name-call and caterwaul, as a dinged Fezzer arrives in the car park, or worse, on the ignominious back of a tow-truck. 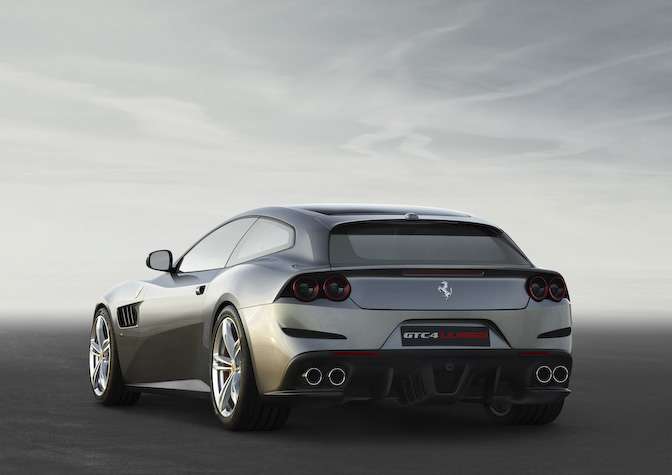 Not that four-wheel-steer will stop a poorly driven supercar from making its owner look like a prize pillock but, armed with a little bit of motoring nous and an appositely tempered right foot, high-speed jaunts on dry tarmac await the judicious GTC4 owner. The 4WD only means that the car’s prodigious V12 power output of 690bhp can be managed with a degree of notional sobriety. Shovel that lot through the back tyres alone and you would be able to say farewell to your no claims bonus for at least the next 15 years, while the AA picks up the pieces.

I am informed (because I have not, unsurprisingly, found myself on the prestigious invitation list to sample this statistic-busting sports-wagen, to experience its potential) that its engine betrays none of the edgy performance delivery of many of its race-bred forebears. In fact, while not sounding diesel-like, because how could it, when it emerges from the gates of the Prancing Horse, at Maranello, to whose engineers the whiff of heavy oil would be complete anathema, it delivers around 80 per cent of its 514lbs ft of torque from as little as 1,750rpm (just like a diesel would).

While I have always felt that, when Il Commendatore (Sr Enzo Ferrari) was alive and farmed out design aspects to outside studios like Zagato and Bertone, it was the outlines created by Pininfarina that were the Italian firm’s most timelessly beautiful. According to the blurb, the GTC4 was styled in-house. While not being blind to unutterable beauty, I have not found any of Ferrari’s most recent designs to be attractive in any way. Oh yes, they attract attention, of course they do, their owners blip the throttles to ensure that you will hear and see their latest acquisitions. However, in my eyes, nothing will supplant the lissom lines of a Dino 246GT, a car that never (officially) wore a Ferrari badge… until the arrival of the latest Lusso. 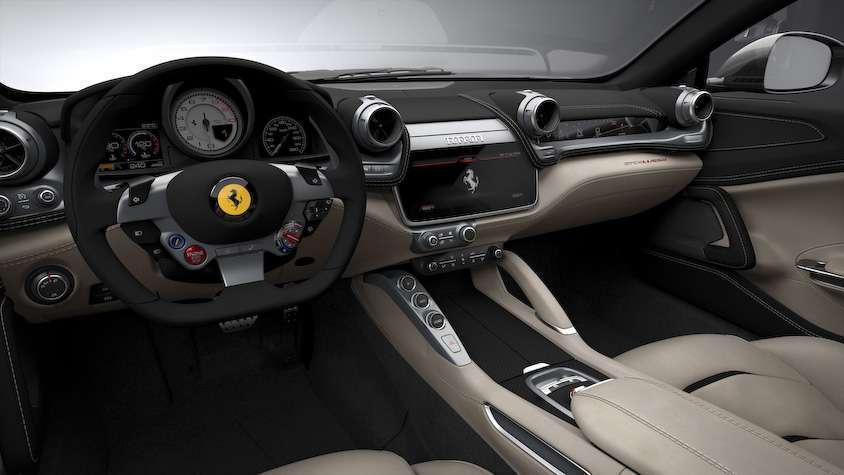 The new GTC4 is, in my view, the most stunningly gorgeous car produced by Ferrari in more than forty years.

It possesses a purity of line across its bonnet and tailgate that is natural artistry. Its flanks are devoid of silly extravagances, leaving only a set of gills to aid cooling and a sensual flow from front wing edge to kamm tail. Pinched and tucked in at all the right spots, it never looks less than sinewy, with the metal panels drawn tightly against what could be (but is not) a superleggera (superlight) sub-structure. Of course, the inevitable aerodynamic restraints are applied, to ensure that it does not fly off the road once the speedometer needle reaches into treble figures, but they are subtle and not overt. The result is a classical elegance that Ferrari has not been able to boast about for rather too long.

The car’s interior is also timelessly gorgeous, with finest leather caressing around whatever it takes to turn utilitarian need into sensuously flowing form. Four near-identical chairs fill the cabin that I am assured will even accommodate my two metres of height, in front at least, in long-distance comfort. The now expected ‘mannetino’ steering wheel, with its F1-inspired controls, will confuse and irritate all but the ber-wealthy cognoscenti to whom Ferrari appeals, and a new instrument display and centre console stack deliver a profusion of switches that are sure to delight the iPod generation, while doing very little for the sanity of the residents of The Old Motoring Duffers Home for the Sick and Bewildered. 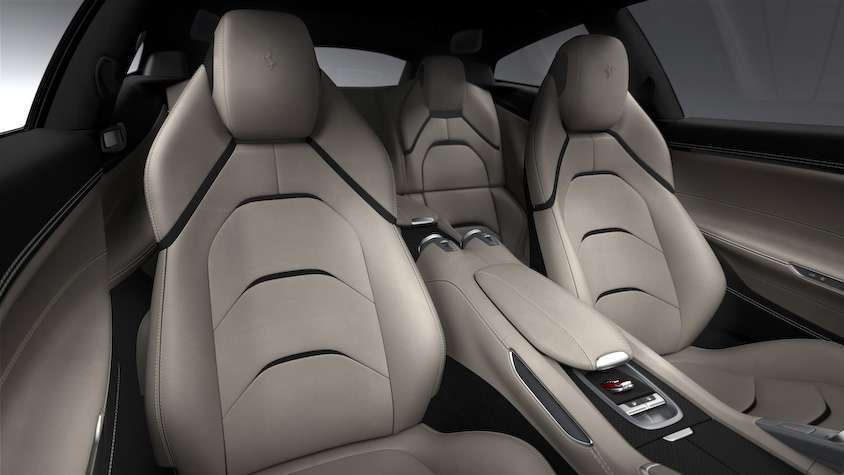 Naturally, it will exceed 200mph, because it has to. It will crack the 0-60mph blitz in a blistering 3.1 seconds, because it has to. It might even manage to eke out more than 10 miles to every gallon of premium petrol filling its fuel tank, as long as its driver is not tempted into indulging his open window aural delights at every juncture, because it has to. This Ferrari is entering a bewilderingly busy sector of the new car market. Oh, it is not busy, like a mainstream, or even premium sector, but it is crowded with similarly price-tagged (£220-£300,000), low volume supercars that the rest of us can only ogle at, if we even get that chance to spot some Russian oligarch’s precocious progeny punting around Chelsea High Road, or the back of Harrods, in his mildly battle-scarred example.

From the realms of the unrealistic made metal weighs in the latest Ferrari, in all of its Technicolor splendour. There is nothing new about the GTC4Lusso, but it is a beautifully forged, wondrously elegant example of automotive art-chic at its best. It makes its supercar rivals look a bit over-wrought, as if their makers are just trying a little bit too hard. Whereas, the Ferrari gives all the appearance of being effortless. Yep. I love it and I believe it to be the most beautiful car in the world bar none… at this moment in time. 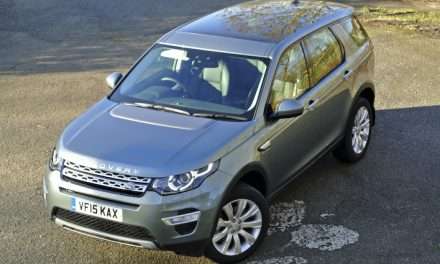 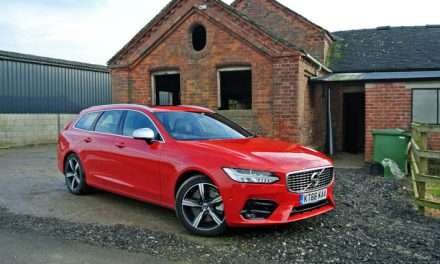 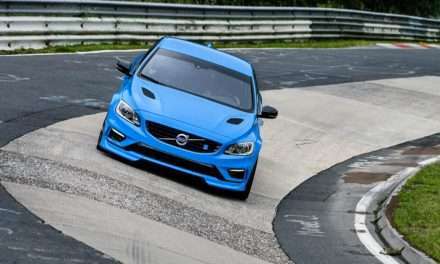 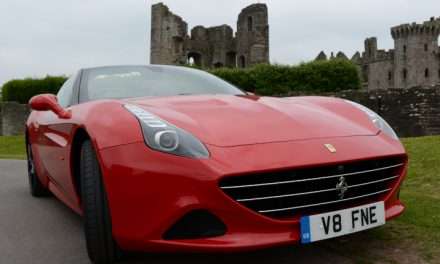