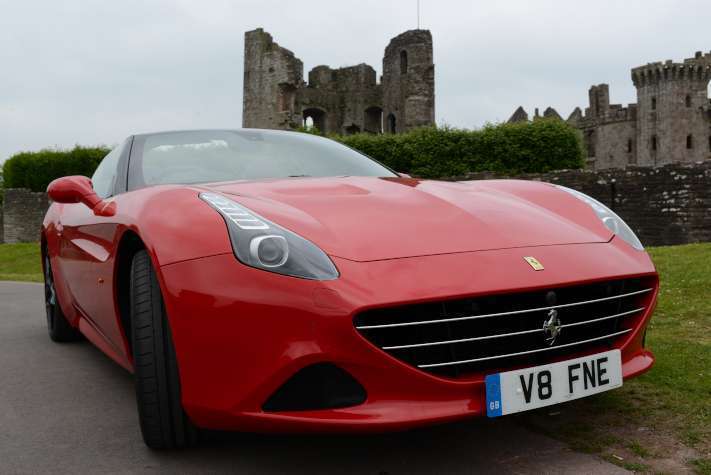 OK, I ADMIT IT, I am in love. I have trawled through dozens of pictures of her. I have watched her in video performances. Yet it is only when I see her in the flesh for the first time that I am utterly lost for words. 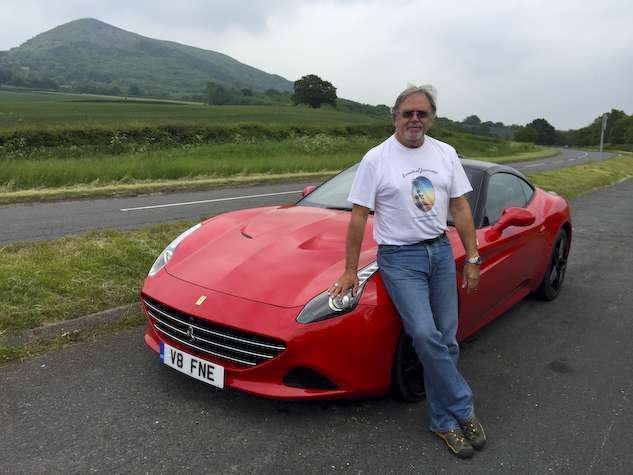 I travel to Slough to meet her, just off the M4. Not the most salubrious of places to meet a classy, stunning Italian redheaded supermodel, you might think, but, having now stood before her, the ends of the earth would not be far enough away. So here she is, waiting for me in the car park, drop-dead gorgeous, aloof, imperious even, exactly as I had imagined her to be. She is immaculately presented, a flawless body, and oozing sexiness. I reflect briefly on Edgar Allan Poe, and his beautiful poem, ‘A Dream Within A Dream‘.  How I already wish this to be Groundhog Day, when I can re-live this moment on repeat. 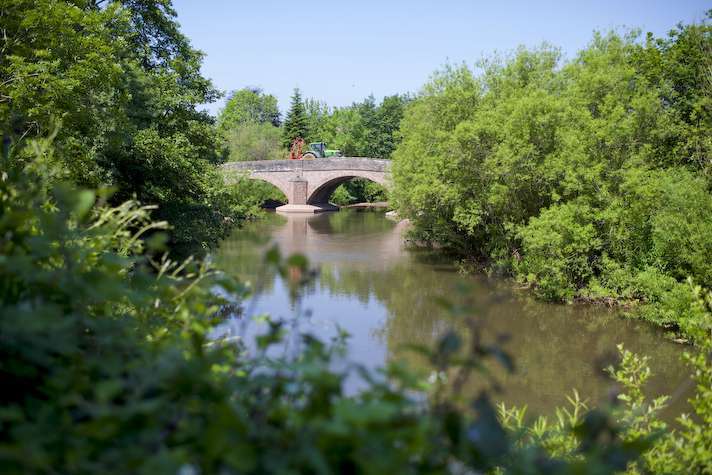 This is to be our first date. I am desperate to impress, yet understandably nervous. As we are spending the weekend together, I suggest that we head west along the M4 to the Black Mountains in Wales. This group of old red sandstone hills in the northeast part of the Brecon Beacons National Park is cloaked in grass and heather, and laced with rivers. 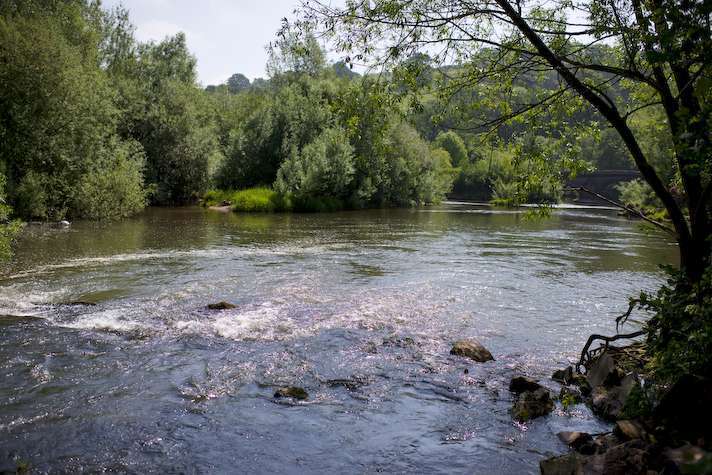 This is a beautiful part of Wales, located to the east of the arc described by Hay-on-Wye, Talgarth, Llangorse, Crickhowell and Abergavenny. It is an area I know well, as my sister and brother-in-law live in an idyllic village to the east of Abergavenny. We have scaled several of the peaks hereabouts, including the Sugar Loaf and Ysgyryd Fawr, also known as The Skirrid. 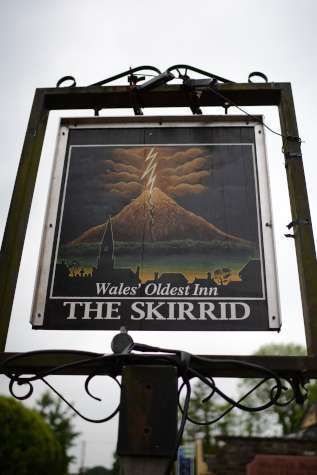 Talking of The Skirrid, there is an old inn near Abergavenny that I believe might impress her. Reputed to be the oldest pub in Wales, the Skirrid has woven itself into history and folklore as also being the most haunted inn in Wales. 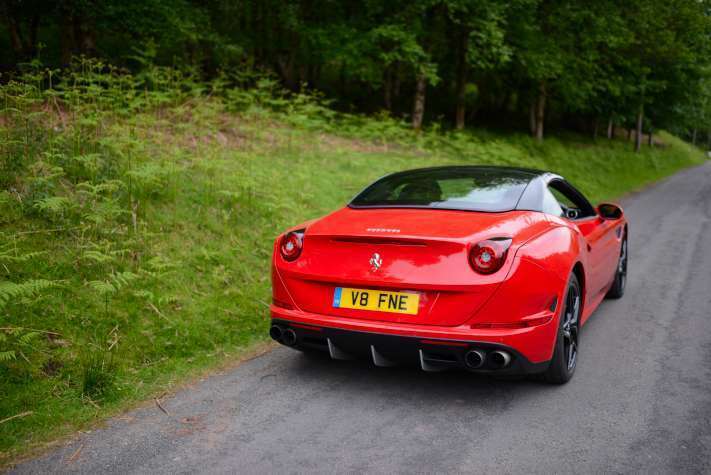 As we motor along the M4, I can sense other drivers staring with envy. I am not surprised, considering who is with me. Unexpectedly, we cruise alongside one of her cousins… older, but still looking stunning in a similar red outfit. As we glide past, my beau offering a throaty roar of approval, we receive a friendly wave of acknowledgement. As we approach the old bridge on the M48 which crosses the magnificent River Severn, the traffic slows to a crawl. With the last hour or so proving somewhat of a stop/start relationship, I flick through the songs on my iPhone, and suggest ‘Lady in Red’. She counters with ‘You Don’t Impress Me Much’ by Shania Twain. Oh dear, this is clearly not going as well as I had thought. 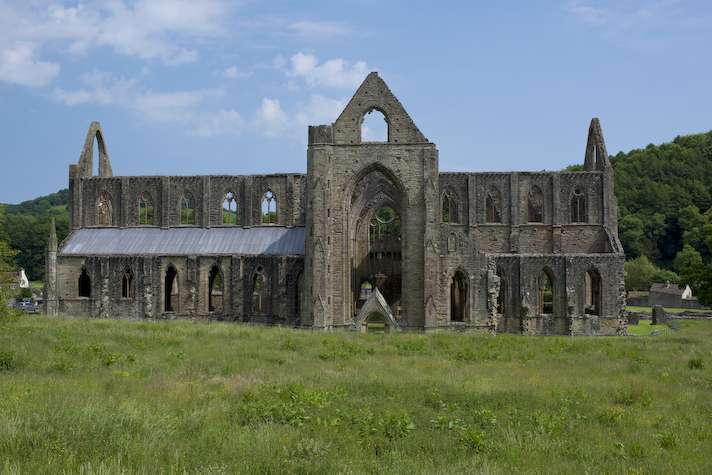 Once over the bridge, we sweep past Chepstow, and head towards Tintern Abbey and the stunning Wye Valley. The sun is high overhead, sending shards of light through the trees as I drop the roof. We catch up to a BMW, poodling along the winding road. I know I am in trouble when I spy a straw trilby on the parcel shelf. Tourists! I am looking for somewhere to overtake, but to no avail. I can hear she is getting wound up, her previous gentle purr turning to a slow, rumbling growl. Ah, an opportunity. I flick her from Comfort to Sport mode, use the paddles to change gear, and floor her. Caught by surprise, she lets out a terrifying roar that resonates through the trees. 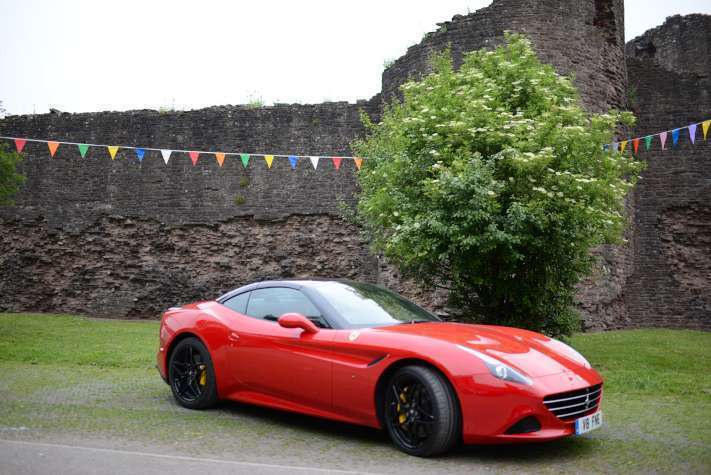 As we approach Monmouth, she has had time to settle down once again. Perhaps she is even slightly impressed, I tell myself. We arrive in the village of Skenfrith, tucked away in a divine valley, surrounded by rolling hills suitable to adorn any landscape artist’s easel. I am calling in to see Michelle and Graham, who have been eagerly awaiting our arrival. They are all smiles, clearly instantly impressed by my travelling companion, who conveniently flashes her eyelids, clearly comfortable in her own skin, purring with satisfaction, with no hint of the occasional growl of disapproval she emitted during our journey here.

The next morning I am keen to show her the countryside and its many historic attractions, so for starters I take her to Raglan Castle, a late medieval castle located just north of the village of the same name. If they say an Englishman’s home is his castle, then William Herbert’s Raglan is the Welshman’s equivalent. Having been built for show rather than with battle in mind, Raglan still managed to hold off Parliamentarian forces for three months in one of the last sieges of the Civil War. Having then been systematically destroyed by parliament, enough of this magnificent building remains to still impress the visitor. I am not sure about our Italian redhead, though. She decides to stay outside the walls, preferring to have her photograph taken by adoring male fans than take any interest in this piece of history. 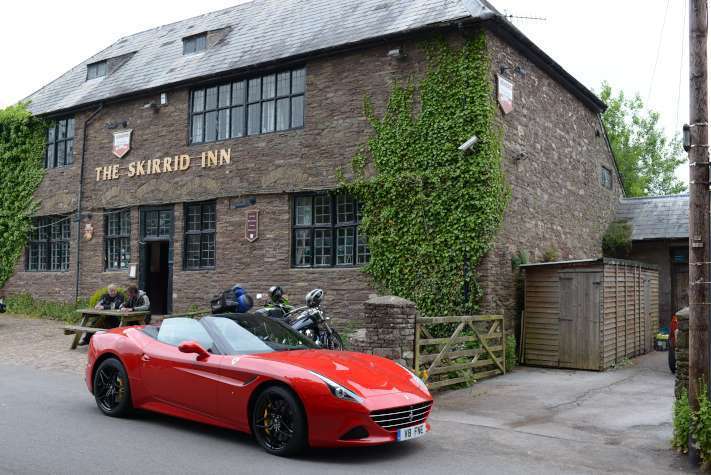 Ok, what next? We make tracks for the Skirrid Inn, back near Abergavenny. As we meander along the narrow country lanes, people rubberneck out of car windows. Even women offer nods of approval. I smile inwardly. I regale her of the time I was renting a flat in Lincoln. Late evening, about 2am, I hear children’s voices in my bedroom. Close by the wardrobe. I lay under the sheets, petrified. They are laughing, and getting closer. Suddenly, all is quiet again. It is a good hour before I manage to breathe normally again, and turn the light on. The next morning, I explain this occurrence to the caretaker, who tells me the house was used as a school during the Victorian era. That grabs her attention. 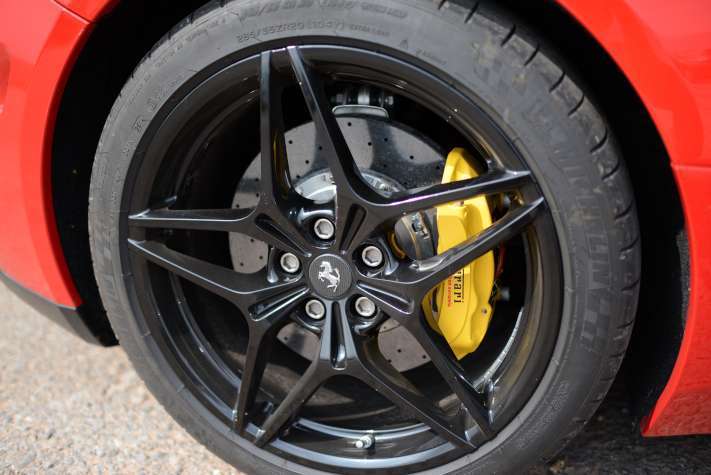 We pull up outside the Skirrid Inn around lunchtime. I wax lyrical about the fact that this is the most haunted pub in Wales. The name of the inn is derived from the Welsh word for shiver, ‘Ysgyryd’. Legend would have you believe that two thousand years ago, in the hours after the Crucifixion of Jesus, the mountain itself showed its anger, shuddering, shivering and breaking into two, creating ‘the Great Shiver’ (Ysgyryd Fawr), and ‘the Little Shiver’ (Ysgyryd Fach). 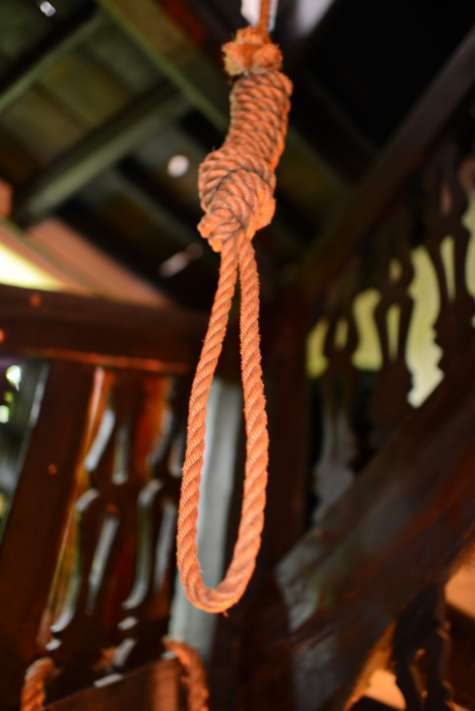 Evidence suggests that the inn was around during the Norman Conquest in the 11th century, so you can expect a few ghosts to be around. However, there is a more grisly past associated with the spectral visitations, as it was used as both a courtroom and a place of execution, with its own oak hanging beam. Do I perceive a shiver? Clearly daunted, or haunted, she decides to stay outside whilst I venture past the bar and see the staircase where a rope still hangs. It is dingy and oppressive, with a creaking staircase spiralling upwards. On second thoughts, this is not the kind of place I would want to spend the night, even though rooms are available, and ghost hunters and the curious are happy to brave the darkness. 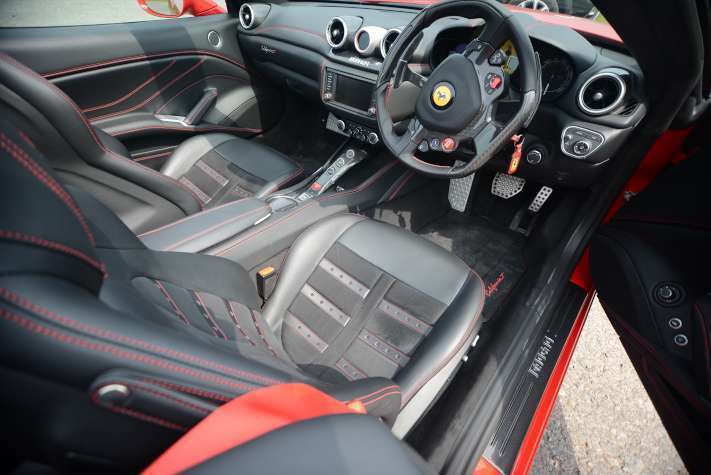 Stepping back outside into the sunshine, a group of bikers are clearly romanticising about her. I venture to suggest that she may be out of their league and, with a level of arrogance which is certainly not really me, promptly hit the start button on the steering wheel. With a roar of approval from her, and jealous looks from the boys, we head off to the Sugar Loaf, which lies two miles north-west of Abergavenny. 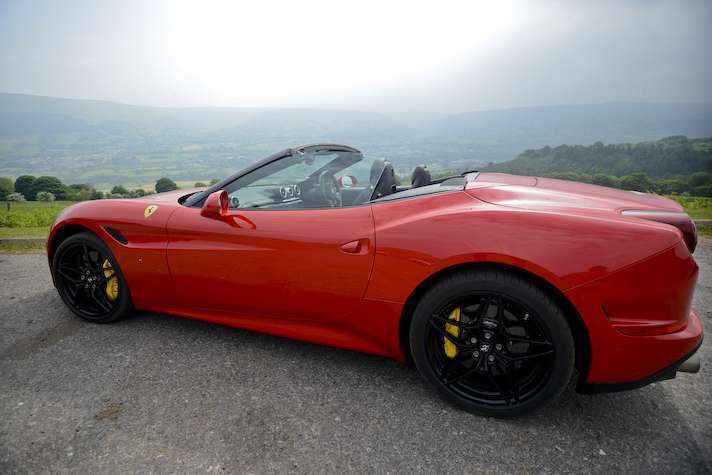 The southernmost of the summit peaks of the Black Mountains, its rounded heather and bracken-clad shoulders are criss-crossed with paths, proving great vantage points to take in the landscape’s rugged wilderness. We make for the car park on the Llanwenarvth, the main access point on to the Sugar Loaf. A stroll to the summit rewards walkers with panoramic views across South Wales, the Brecon Beacons, and into south-west England. 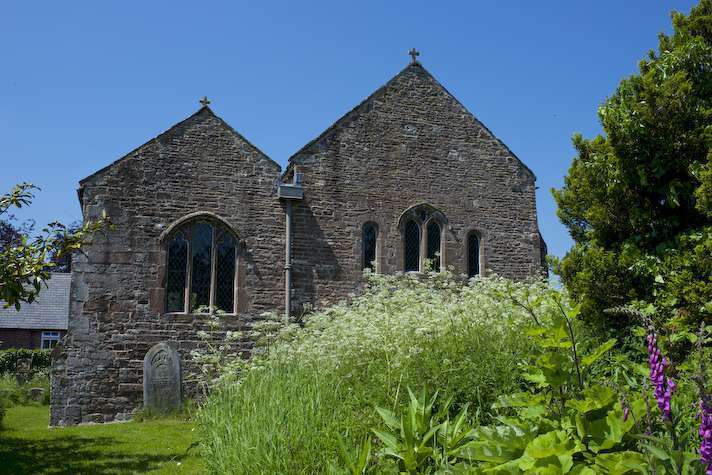 Sunday morning, and we drive to St Michael’s Church in Garway, the reason being that I have a real fascination for the Knights Templar. It was only the previous evening whilst in conversation with my sister that I learnt that the church was only one of six in England attributable to the Order. The building is hidden down a short, narrow, tree-lined lane. I leave her in the shade as I pass through the gate. 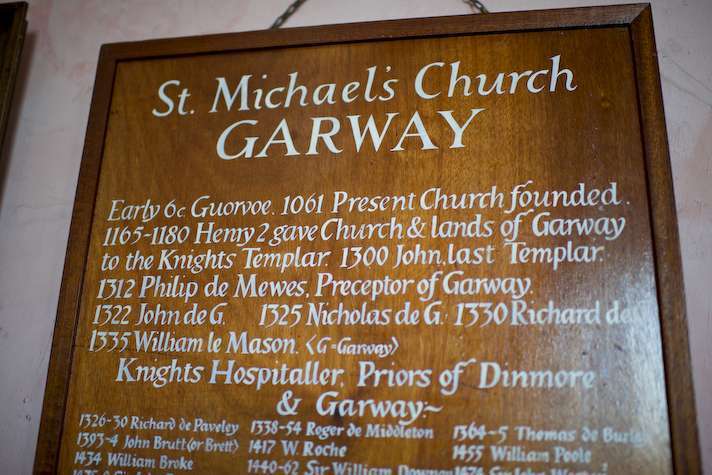 Accounts testify that during the reign of Henry II, around 1165-1189, the church and lands of Garway were given to the Knights Templar. At the dissolution of the Order of the Temple in England in 1308, the Preceptory and Church passed into the hands of the Hospitallers, or Knights of St John of Jerusalem. 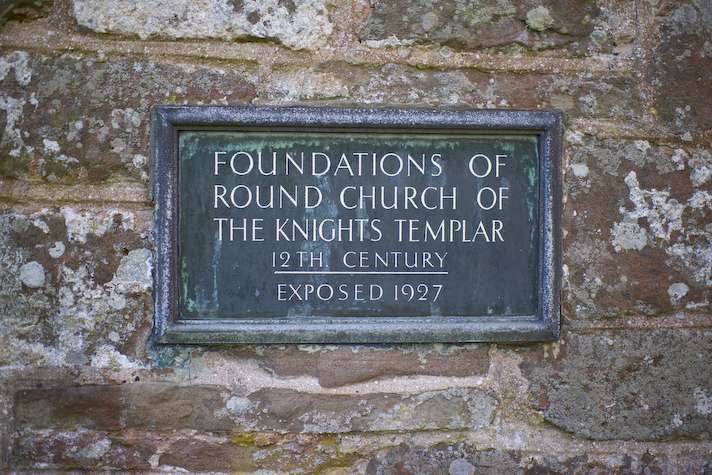 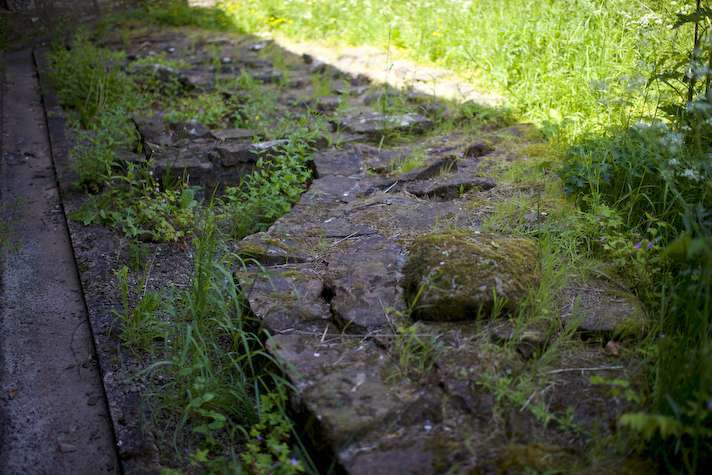 Excavations in 1927 resulted in the unearthing of the foundations of the round church of the Knights Templar, possibly in imitation of the Church of the Holy Sepulchre in Jerusalem. 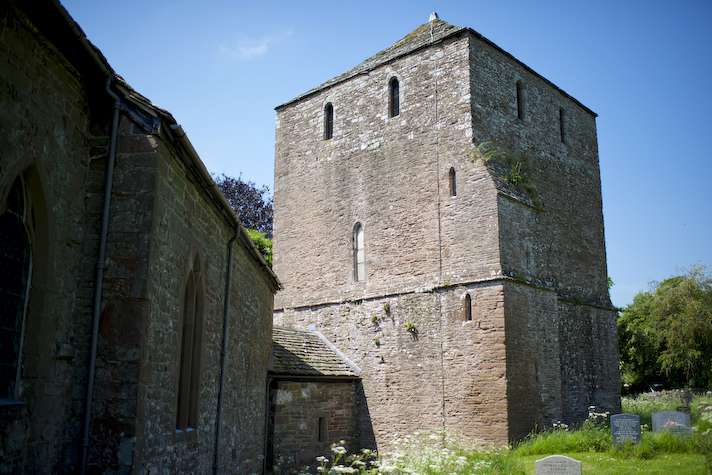 The configuration of the church is unusual in that the massive square tower stands at a curious angle to the nave, apparently designed so that the parishioners might find refuge from the hostile Welsh just across the River Monnow. 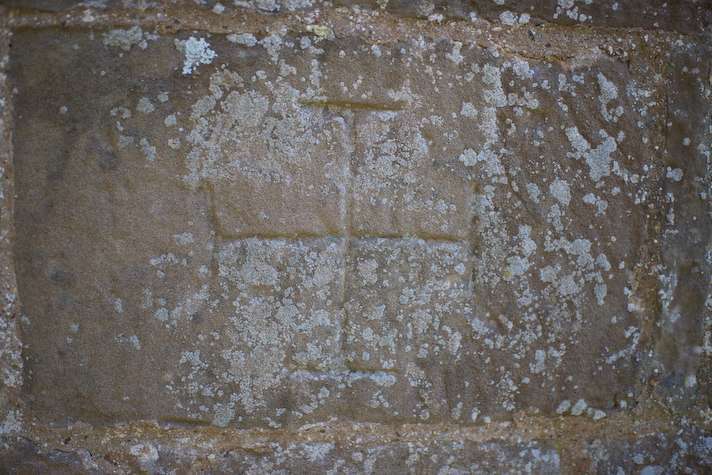 I note a number of Knights Templar symbols on the outside walls. My investigations complete, we head for a leisurely lunch, before I suggest a drive through this picturesque countryside on what transpires to be a lovely, sunny afternoon. 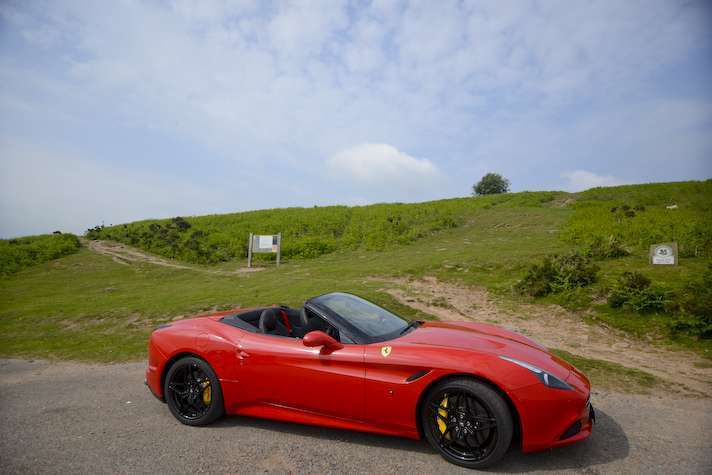 Roof down, sun on my head, sport mode, we fly through the Welsh countryside along the narrowest of lanes, around hairpins and blind summits, high hedges a blur, her low centre of gravity hugging the verges, a medley of uproarious joy. This is driving on the edge. 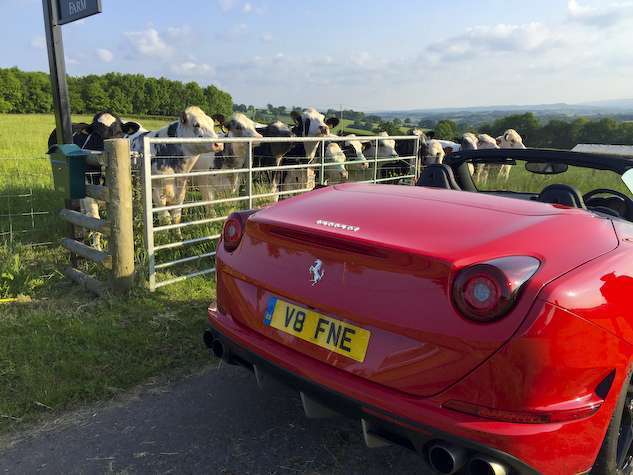 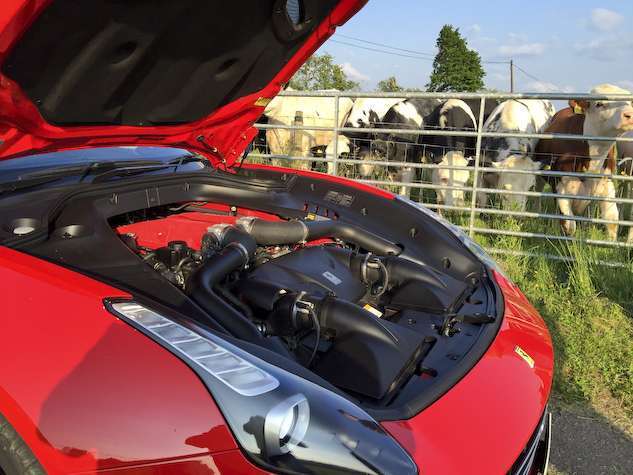 Adrenalin-pumping, heart-racing exhilaration, fingers lightly flicking through the gears with sublime ease. So this is what it feels like to be behind the wheel of one of the most prestigious marques in the world. Sexual connotations aside, she is giving me the ride of my life. 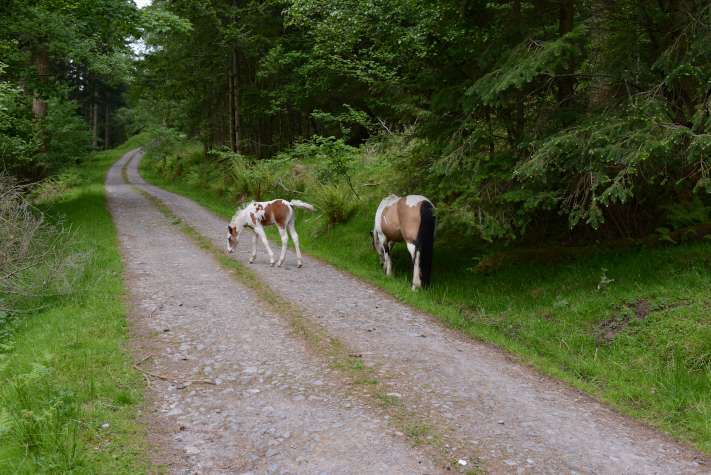 Stop, draw breath, flip back into Comfort mode. Let the pulse get back to its normal, slow rhythm. Sheep and cattle back in focus. What is that ahead? Wild ponies in the lane. Not quite your prancing horses. The disadvantage of coming across a pile of horse manure is that, in a low-slung skirt such as she is wearing, one has to treat it as a roundabout, and that in itself presents difficulties on these narrow Welsh roads. 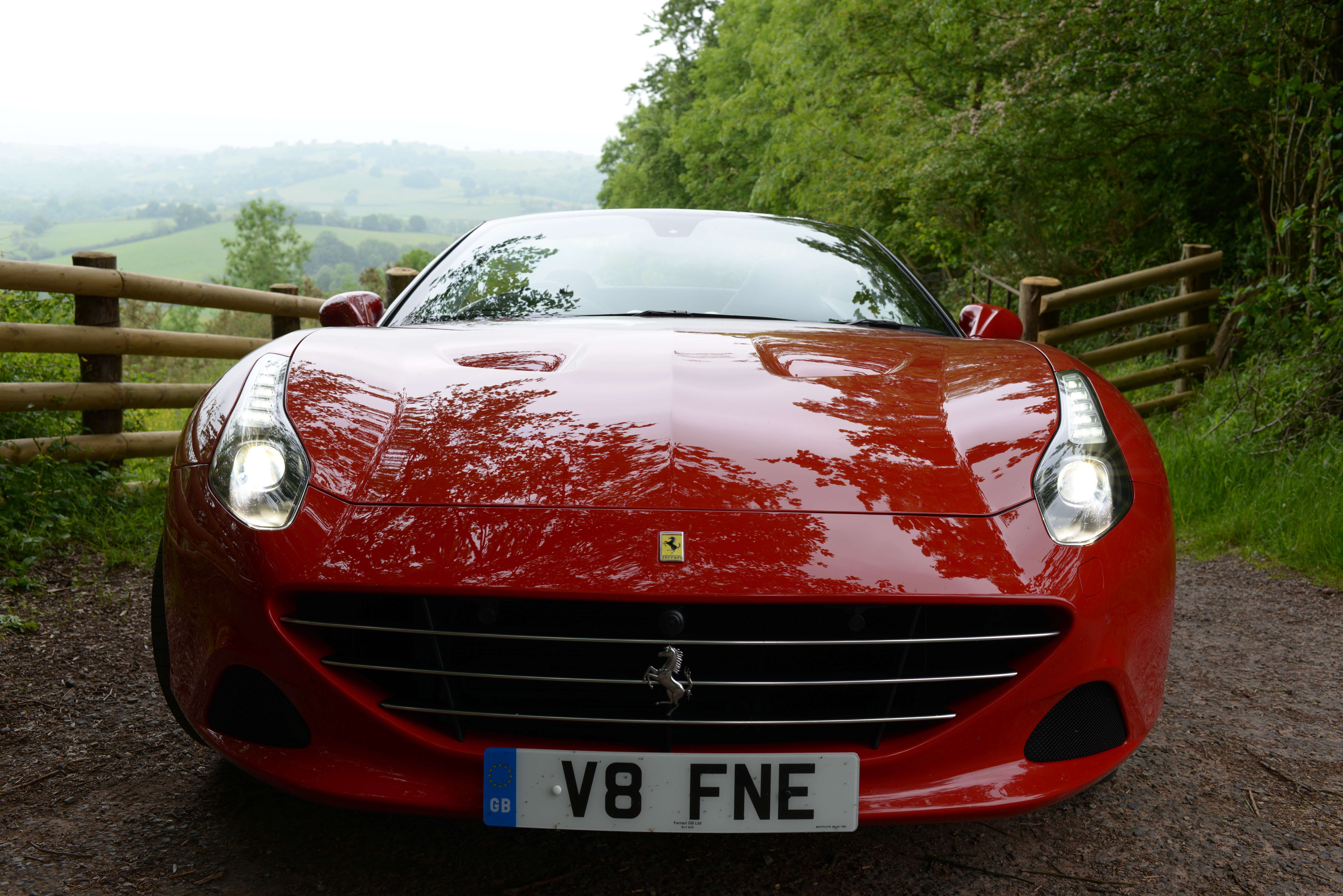 Monday comes all too quickly, and we find ourselves back in Slough, where it is time to bid farewell. I ask if I can see her again or, failing that, whether she would be happy to introduce me to one of her supermodel cousins. After a brief silence, she says she would take that one under advisement. Ah well, you can’t blame a chap for trying. 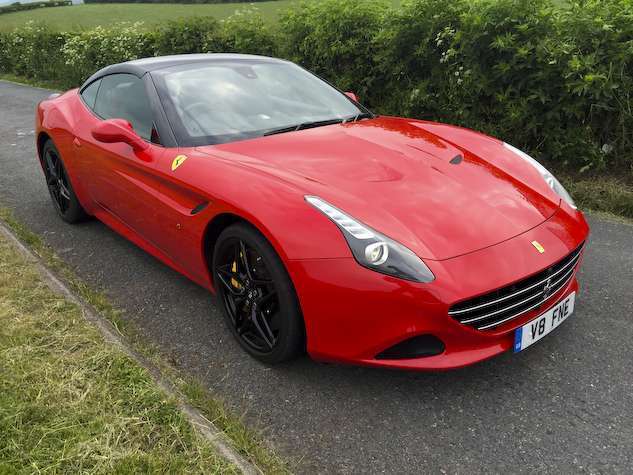 Oh yes, I forgot to give you her name… Ferrari California T. Should you come across her, say hello from me.

Take this kiss upon the brow!
And, in parting from you now,
Thus much let me avow –
You are not wrong, who deem
That my days have been a dream;
Yet if hope has flown away
In a night, or in a day,
In a vision, or in none,
Is it therefore the less gone?
All that we see or seem
Is but a dream within a dream.

Head to Breckenridge for a holiday less ordinary 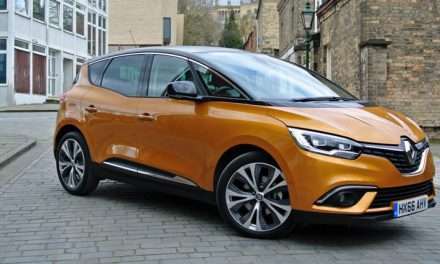 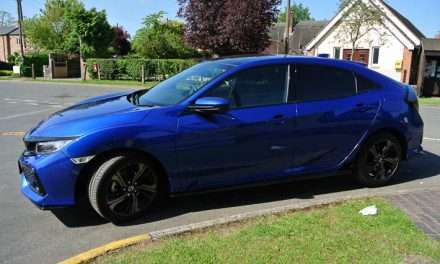 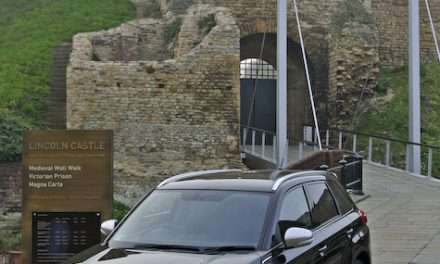