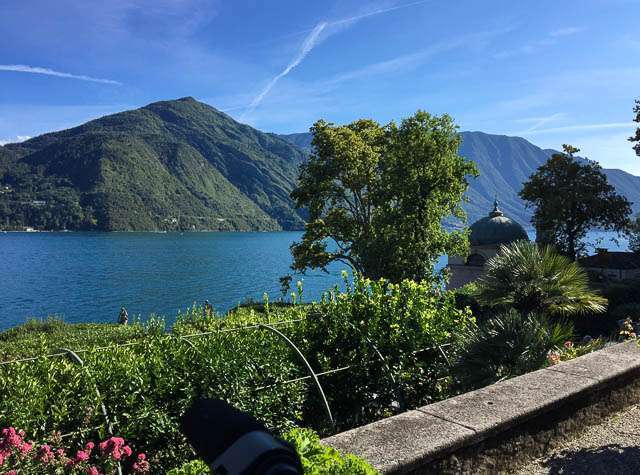 Complex, self-sacrificing, ambitious, and with an overwhelming passion for adventure, Guido Monzino was a man for whom the Latin aphorism ‘Carpe Diem’ may have been written

ENGRAVED ON the entrance to the Villa del Balbianello is, ‘Fais ce que tu voudrais’ (Do whatever you want), words that allude to the proverb coined by Francois Rabelais.

If you know nothing of the French renaissance writer and humanist, allow me to steer you in the direction of my theme. In his first work, Rabelais writes of the Abbey of Thélème, which was built by the giant Gargantua. Presenting the abbey as a utopia, it is here that the Thélèmites lived according to a life free of laws, statutes and rules. Eating, drinking, working, sleeping when the fancy took them, ‘Do what thou wilt’ was their one abiding rule, ‘because people who are free, well-born, well-bred, and easy in honest company have a natural spur and instinct which drives them to virtuous deeds and deflects them from vice; and this they called honour’. 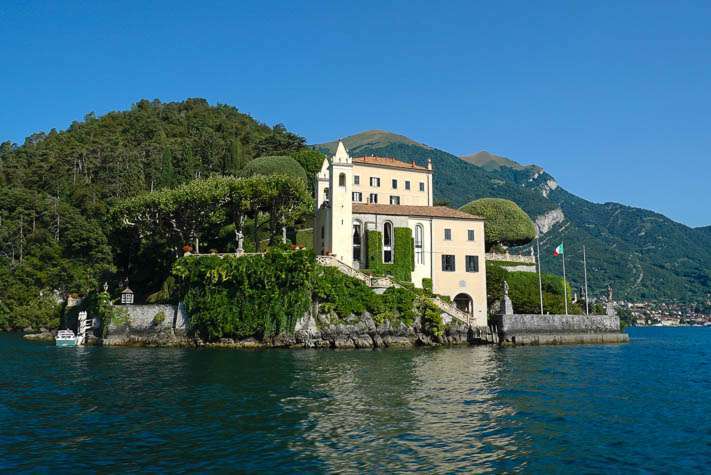 The Villa del Balbianello is located on the tip of the small wooded peninsula of Dosso d’Avedo, on the western shore of the southwestern branch of Lake Como. A Franciscan monastery, which had existed here since the 13th century, was converted into a villa in 1787 by Cardinal Angelo Maria Durini. The property passed through several hands after his death, before being acquired by Count Guido Monzino, whose father Franco founded the Italian supermarket chain Standa.

Born in Milan on 2 March 1928, Guido Monzino spent part of his early life at the family home in Moltrasio, on Lake Como. After completing classical studies, he took up employment with Standa, where he soon rose to the post of general manager. An introvert by nature, he did whatever took his fancy, including selling the family business aged 30 in order to pursue his passion for adventure. With trips to Patagonia, Equatorial Africa, Greenland and the North Pole, in 1973 he led the first Italian expedition to climb Mount Everest.

Having left the exterior essentially unchanged, Monzino had the interior of Villa del Balbianello completely re-decorated. Living in constant fear of being assassinated, he even added an elaborate system of hidden passages. His incessant wanderlust, however, saw him only ever spend a month of each year at the property. Even his mother, for whom he had installed an attractive apartment on the ground floor, chose never to overnight here. 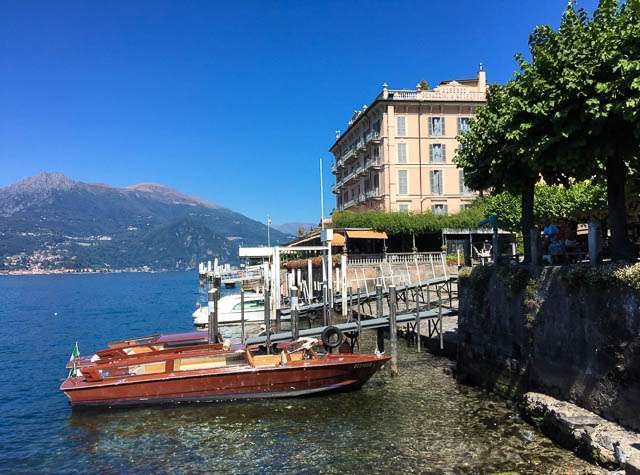 A chain smoker, upon his death in 1988 from lung cancer, Monzino left the villa along with most of the small wooded peninsula and an endowment to pay for maintenance, to the Fondo per l’Ambiente Italiano, the National Trust of Italy, and today it is one of the most visited attractions in the country. Accessible only by boat, visitors step on to the jetty and into a world frozen in time. The luxuriant garden, which frames the villa, is created vertically. From the plane trees pruned in candelabra shapes alternating with wisteria and ivy vines, visitors pass to a large terrace bordered by laurel and boxwood bushes. From here, a sloping path leads gently upwards along the English-style lawn to the open portion of the Loggia, the true heart of the garden. Numerous statues complete the incredible picture. It is easy to understand why a number of feature films have used the setting for location shoots, including scenes for ‘Star Wars: Episode II Attack of the Clones’, and James Bond’s ‘Casino Royale’.

The library and map rooms are exactly as Monzino had left them, the former containing over four thousand volumes, mostly on geography and travel; pages never to be turned, maps, old and new, and a rare collection of old prints of the lake, never again to be poured over. It is at once a fascinating, strangely romantic and frustrating legacy. The rooms, which are arranged over various levels, offer an extraordinary insight into the man and his mind. Important pieces of English Georgian and French antique furniture from the 18th and 19th centuries, Beauvais tapestries, French boiseries and Oriental carpets decorate some of the rooms. In others, display cases house rare and ancient objects from lost African civilisations, the Aztec culture, Parisian marble, Mayan terracotta figures and Chinese ceramics from the Tang and Ming dynasties. Gracing the guest room is a rare collection of paintings created in glass from the 18th century, Venetian school. 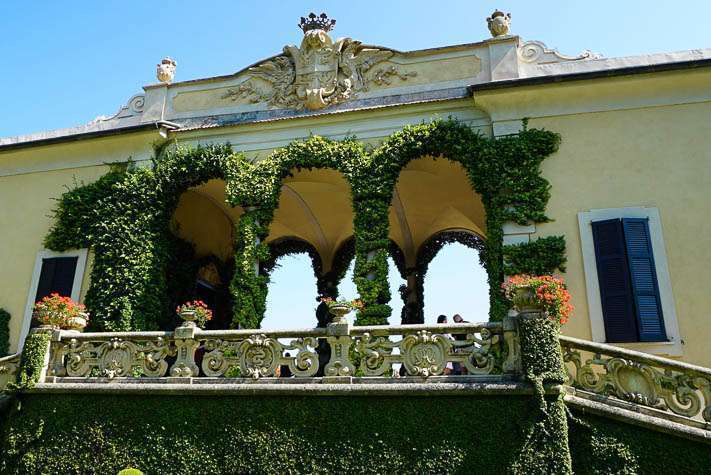 Monzino converted the attic to his private museum, which today contains the equipment used during his expeditions, centre stage being given over to the huge wooden sled which he and his team of men and dogs hauled across the frozen wastes on his 1971 expedition to the North Pole. Pinned to the wall is the tattered Italian flag, which had been so proudly planted on the summit of the world’s highest peak.

It is so easy to get lost in one’s thoughts here. Forget the day and the time and the hotel where you dropped your bags. It is a time of reflection, and, yes, sadness, that Guido Monzino, after a decade of renovating his beautiful home, had so little time to enjoy it. A man who had cheated death on the frozen icecap, and high in the mountains; a man who chose to live his life without boundaries, was to face his own mortality so young, like his father, at only 60. I cannot help but feel that he should have been born of the time of Shackleton and Scott, great men with a passion for life, who felt the most alive when danger came knocking, surviving on their wits and intelligence and good luck.

Monzino was a man of extraordinary talent and derring-do, and accomplished twenty-one expeditions. He is perhaps most remembered for leading the triumphant Italian team to Mount Everest. The huge team included over sixty members and a hundred sherpas, and helicopters were used to shuttle equipment past the terrifying Khumbu Icefall. The eight-man summit team included Rinaldo Carrel. As a contributor to the book ‘Guido Monzino, l’ultimo signoire di Balbianello e le sue venturo spedizioni’ (the last master of Balbianello and his twenty-one expeditions) by Rita Ajmore Cat, and first published in 1997, Carrel noted: ‘He was a master to me, capable of instilling in me the desire to attain high goals, but above all he taught me how to make my dreams come true whilst never betraying the loftiest ideals civil society is based on.’ 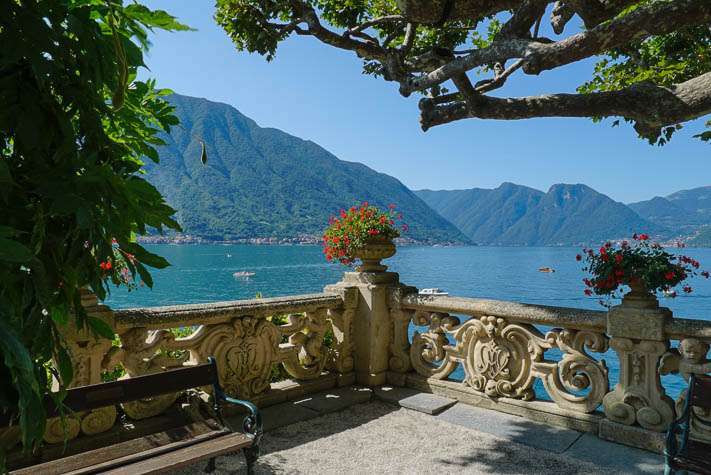 Set against the foothills of the Alps, there is little wonder that Monzino was so attracted to Lake Como, with its striking landmarks and attractive resort towns, including Bellagio, which lies at the junction of the three slender branches that make up the lake. Whilst many of the waterfront villas around the shore remain in private hands in this playground for the wealthy, there are others, like the Villa del Balbianello, which are open to the public.

The Villa Carlotta, as an example, was built at the end of the 17th century by the Milanese marquis Giorgio Clerici, and today functions as a museum, housing artworks, including sculptures by Antonio Canova. The property is fronted by lovely gardens with a range of cultivated blooms, and sits alongside the shore close to the 4-star Hotel Grand Cadenabbia. This rather imposing building dates to the early 19th century, and has retained much of its original charm, the main hall being decorated with ancient stuccos, mirrors, frescoes and majestic columns. The hotel is also the perfect location from which to reach the ferry point across the road and enjoy the short trip across the water to Bellagio. 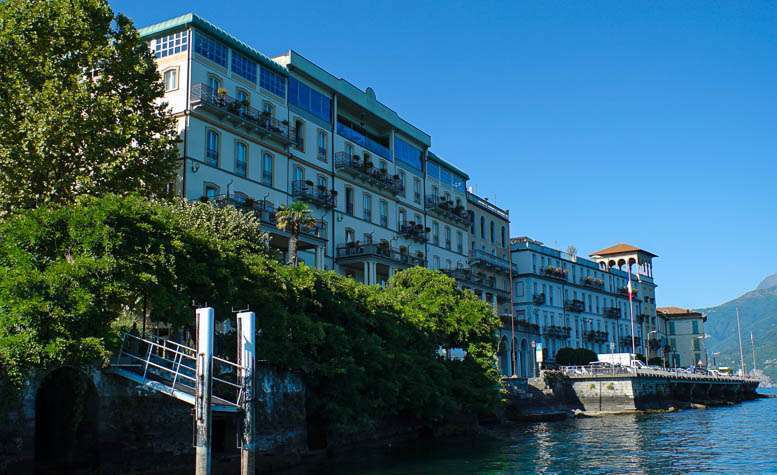 Set on a promontory, the village is renowned for its narrow, cobbled streets and elegant buildings. Visitors disembark along an attractive tree-lined waterfront, itself dotted with pleasant cafés and restaurants. Known as the Pearl of Lake Como, most tourists arriving at Bellagio take a wander uphill along well-worn steps to Via Garibaldi, and on to the main square, which is dominated by the Romanesque Basilica di San Giacomo.

A leisurely lakeside stroll leads visitors to the attractive sloping gardens of the Villa Melzi. Designed by architect Luigi Canonica and botanist Luigi Villoresi between 1811 and 1815, prominent features include a shaded water garden and an imposing blue-roofed pavilion, which nestles by the water’s edge.

For all the majesty that Lake Como has to offer, little can compare to the magnificence of Villa del Balbianello. For a man of noble ideals, a man so drawn to the toughest and most extreme environments in the world, each becoming the theatre of his extraordinary feats, Guido Monzino had an eye for beauty. Today, walking in his footsteps, soaking up those same views that he so adored, I have to be satisfied with his spirit, which undoubtedly lives on, alongside his legacy of a home and gardens of unprecedented splendour, here on the idyllic peninsula of Dosso d’Avedo.

July and August are the hottest months, when temperatures can reach over 30 degrees and when you can expect the biggest numbers of visitors. The shoulder months of May and October are perfect, with generally mild temperatures, but rain can be torrential

The closest and therefore most convenient airport to Lake Como is Milan’s Malpensa, with flights from Luton, Gatwick, Stansted and Heathrow. Once at Malpensa, the best option is to hire a car. Follow the directions towards Como/Chiasso, taking the A36 (Pedemontana Lombarda) and then on to the A9. Alternatively, there is a direct regional rail link from Malpensa airport to Como town (trenitalia.com), with trains stopping at Como San Giovanni station, allowing further bus connections including to Bellagio

TUI Lakes & Mountains (0208 610 3139, www.tui.co.uk/holidays/lakes-and-mountains) offers holidays with loads of things to see and do, making the most of the local territory and cultural experiences

Lake Como -Prices are from £986 per person for a week’s all-inclusive at the four-star Grand Hotel Cadenabbia on Lake Como, including flights from Gatwick to Milan and transfers. Direct flights from most regional airports are available at a supplement starting from £20

Reach the villa by water, using the taxiboat service provided on the Lido of Lenno. Entry €10, National Trust members €8. Guided tours in Italian and English to groups of up to 15 people by reservation 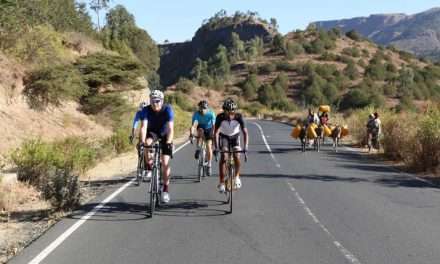 Sitting on the dock of the bay… 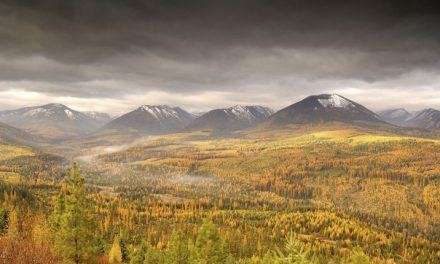